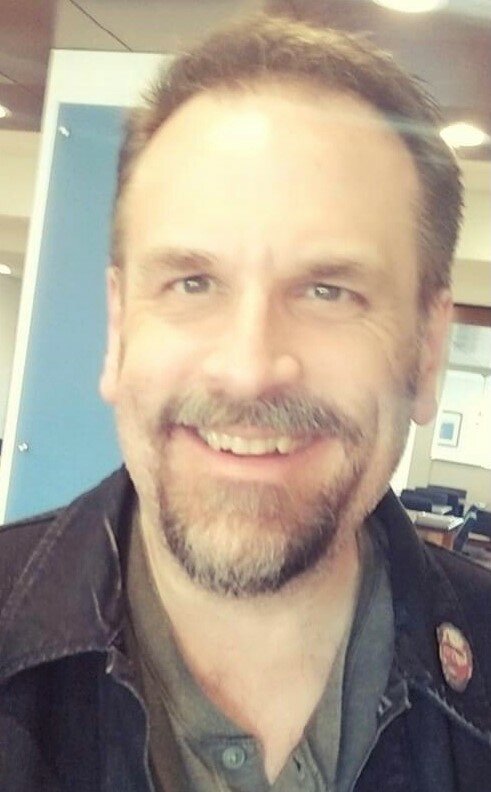 William Dennis Reiser was born in Monroe, Michigan on September 22, 1964.   He was the only child born from the union of Dennis William Reiser and Eileen (Fish) Reiser. Bill attended the University of Michigan and Monroe County Community College where he earned an Associate’s Degree.

A longstanding giant in the Monroe County Library System, Bill offered leadership and management at the Ellis Library and Reference Center for the past thirty-four years. He began his career in 1987, and quickly became a contributing force in the growth of the library. Bill was a fierce defender of intellectual freedom and First Amendment rights. His commitment to the Ellis staff was unwavering and he dedicated himself to providing support and direction to the best of his abilities. Bill was also instrumental in the development of the Ellis Library’s extensive renovation in 2011. His dedication to excellence and an eye for detail were reflected in all aspects of his life, as were his humor and showmanship.

As a cultural Renaissance man, Bill held a passion for movies, fine arts, and music. He could be found at the theatre every Friday taking in the newest Marvel movie or Oscar worthy performance. A veracious reader, Bill enjoyed mystery and thriller novels as well as rock biographies and comic books. He was a huge fan of Bruce Springsteen and traveled around the country to attend “The Boss’s” concerts. Bill was also passionate about food and enjoyed dining at fine restaurants. When cooking for friends, he went all out and spared no expense. Everyone looked forward to his specialty chicken wings made with detailed preparation and a homemade marinade.

Bill is perhaps best known throughout the community for the production of the Annual Black History Month Blues Series, which he affectionately dubbed “the Monroe County Library System’s award-winning history lesson with a backbeat.” Under his careful guidance, the Blues Series has grown to become the state’s longest running annual blues celebration, with awards from the Public Library Association, the Michigan Library Association, and the Rhythm & Blues Foundation. The Blues Series was also awarded The Blues Foundation’s 2009 Keeping the Blues Alive Award for Education—the blues world’s most prestigious honor available to non-musicians.

William Dennis Reiser, age 57, of Monroe, Michigan, passed away much too soon on Saturday, December 18, 2021.   His passing was preceded by his parents and half-brother: Dustin C. Reiser.

To cherish his memory he leaves his half-sister: Sandy Reiser and a tight-knit community of close friends and co-workers whom he lovingly referred to as his “work family”.

A Celebration of William’s Life will be held at a later date. Arrangements have been entrusted to Merkle Funeral Service, North Monroe; 2442 North Monroe Street, Monroe, Michigan 48162 (734) 384-5185.