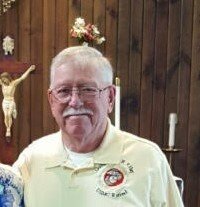 John “Roger” Riley was born in St. Catharines, Ontario, Canada on October 21, 1935. John was one of two children from the union of Thomas “Ralph” and Ethel “Pat” (MacKenzie) Riley.

Roger came to the US when he was 16. He worked at the former Ilgenfritz Nursery in Monroe, MI which was owned by his aunt.  There he developed a love and appreciation of landscaping which he practiced on the various homes he lived in throughout his life.

Roger enjoyed watching and playing hockey in his youth.  However, after enlisting in the Marines in 1955, his hockey playing days were over.  Roger was a proud Marine and it was an honor for him to serve his new adopted country. He worked predominantly in the postal field during his service.  His service included may overseas tours including Vietnam and six tours to Okinawa.  In 1977, Roger would retire from the Marines in Camp LeJeune, North Carolina and move to Dundee, Michigan.  After his retirement, he was very passionate about telling stories of his days in the Marine Corps to anyone who would listen and encouraging the younger generation to enlist.

Even after retiring Roger continued to breathe “the military life.” His favorite saying became “Once a Marine, Always a Marine.” He was supportive of all military branches and often attended funerals of other service members and veterans.

He became a water plant operator for the former Dundee Water Plant in 1979.  He retired after 21 years of reading meters, fixing breaks, and testing the water supplies.

Roger was an avid collector. In fact, there was very little he would not collect. He was a huge John Wayne fan.  He acquired a very extensive movie collection that included almost every John Wayne movie and a lot of different mystery series.

Roger enjoyed traveling back to Canada to see onstage plays in Stratford, Ontario and picking up chocolates from Laura Secord and Chocolate Barr’s Candies.  He would not keep the chocolate for himself.  He would share the chocolates with his “favorite” ladies at church, the bank, and his physicians’ offices.

John Roger Riley, age 84, passed away on Friday, March 20, 2020 surrounded by his loving family.  He was preceded in passing by his parents.

Due to the unfortunate COVID-19 pandemic, a private gathering was held at Merkle Funeral Service, Dundee, Michigan. Online guests may visit www.merklefs.com to leave any messages for the family.

Share Your Memory of
John
Upload Your Memory View All Memories
Be the first to upload a memory!