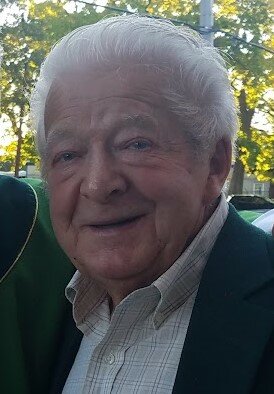 Karl Fiesel was born on February 1, 1936, in Dietershausen, Germany to Georg and Mathilde (Frankenhauser) Fiesel. After graduating from high school, Karl attended trade school. In 1958, at the age of 22, he pursued his dream of immigrating to the United States. With the support of his sponsors, George and Hildegard Sailer, Karl became an American citizen in November of 1964. With a strong work ethic and entrepreneurial spirit, he established an interior decorating business: Karl Fiesel Painting and Decorating.   He operated his company for more than 40 years before finally retiring.   Karl believed strongly that whatever you do, you should ensure it’s done right the first time…and his way! What Karl could do with a paint brush was a unique gift from God; many homes, schools, and churches throughout Michigan and Ohio have benefitted from Karl’s talent.  He was an artisan, a creative force, a skilled tradesman, a true master craftsman.

While Karl reveled in being an American, he was also proud of his German heritage.  He was a founding member of the Toledo chapter of the Schwaben Verein social club and was an active contributor to the German American Festival in Oregon, Ohio. Karl was also a member of the Knights of Columbus St. Joseph Council 7413 in Erie, Michigan. A devoted family man, Karl was a hard-working, loving father and “Opa” to his grandchildren.

In his retirement, Karl still knew nothing but work and particularly enjoyed his yard.  Karl learned to have some fun too, and was able to travel extensively with his grandson, Nicholas “Skipper” Nolen.  Nicholas witnessed first-hand his Opa’s tears of joy sailing under the Golden Gate Bridge, wading in babbling brooks of the Canadian Rockies, imagining being real cowboys throughout Colorado, gazing across the Grand Canyon, and laying under the stars at Hiawatha National Park, among many other adventures.  His granddaughter, Karley Fiesel, also energized Karl and more recently brought him joy with Merle, his first great-grandson!

Karl Fiesel, age 86, of Erie, Michigan passed away at his home on Monday, July 18, 2022.   His passing was preceded by his parents, two brothers, a sister, and a stepsister.

Memorial contributions may be made to St. Joseph Catholic Church, Erie. Online guests may leave words of inspiration or comfort or share a photo by visiting www.merklefs.com.

To send flowers to the family or plant a tree in memory of Karl Fiesel, please visit Tribute Store
Thursday
21
July

Lie In State for Karl Fiesel

Mass of Resurrection for Karl Fiesel