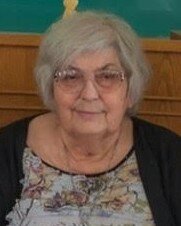 Hilda Marie Schaarschmidt was born on February 6, 1942 in Carleton, Michigan. She was the middle child and only daughter born to Herman Albert and Lillian Mary (Haines) Schaarschmidt. Hilda spent her entire life in Carleton and attended Airport Community Schools. On her seventeenth birthday, February 6, 1959, Hilda wed Joseph Samuel Hazlett Jr., whom also shared her birthday. The couple enjoyed forty-four years of marriage and were blessed with two daughters.

Hilda was a member of the Rockwood Missionary Baptist Church and of the V.F.W. Post 4093 Ladies Auxiliary in Carleton. A talented crafter, she always had a knitting or plastic canvas project in the works. Hilda sometimes sold her creations at local craft shows alongside her daughter. Every Sunday the Hazlett family would gather to play card games including “Marbles”, a game invented by Hilda and her son-in-law Paul which is a mixture of Sorry and Parchessi with playing cards. She also enjoyed deer hunting with her husband and son in-law, Paul. Hilda frequently tuned into reruns of her favorite television program, “Little House on the Prairie”.

Friends may gather on Friday, April 1, 2022 from 9:30am until 2:30pm at Merkle Funeral Service, South Monroe, 14567 South Dixie Highway, Monroe, Michigan 48161 (734) 241-7070. A Celebration of Hilda’s Life officiated by Chaplain Lisa Holdridge of Grass Lake Assembly of God will be held at 2:30pm also at Merkle’s followed by a procession to Roselawn Memorial Park in LaSalle, Michigan.

To send flowers to the family or plant a tree in memory of Hilda Hazlett, please visit Tribute Store
Friday
1
April

Celebration of Life for Hilda Hazlett