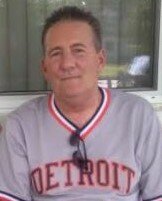 Christopher Thomas Kelly was born on August 5, 1956, in Monroe, Michigan. He was one of three children born to the union of Thomas Patrick and Dorothy Anne (Miller) Kelly.  Christopher attended Monroe High School in Monroe, Michigan graduating with the Class of 1974.  He would be employed at Ford Motor Company in Monroe in Prototype Construction for 32 years before retiring in 2008.

On April 3, 1982, in Monroe, Michigan Christopher married, the former, Jessie Hammac.  The couple would be blessed with two beautiful children:  Joel and Christa.  Christopher loved to tinker with cars and was always willing to share his knowledge to fix a car.   He loved motorcycles with Kawasaki’s being his favorite.   Christopher had a Kawasaki Z-1 and could often be found drag racing his motorcycle at the Milan Dragway in Milan, Michigan or just spending time watching other people drag race.  He loved watching The Three Stooges, Marx Brothers and Western movies, but especially the movies that Clint Eastwood and Paul Newman starred in. He loved to garden and grow vegetables, especially tomatoes and would give his grandchildren tomato plants to plant outdoors.  He weekly looked forward to gathering for burgers with his Ford retirees group including his brother Patrick.   One of their favorite hamburger destinations was to Pete’s Garage in Monroe, Michigan.   As much as Christopher enjoyed his hobbies his most favorite pastime was spending time with his grandchildren, Jude and Isla.

Christopher Thomas Kelly, age 65, of Monroe, Michigan passed away unexpectedly on Saturday, December 25, 2021, at his home.  His passing was preceded by his parents:  Thomas and Dorothy Kelly and his wife Jessie Kelly on November 7, 2021.

Friends may gather on Friday; April 8, 2022, from 4:00pm until a Celebration of His Life at 6:00pm at Merkle Funeral Service, North Monroe; 2442 North Monroe Street, Monroe, Michigan 48162 (734) 384-5185.  To honor Christopher’s passion for the Tigers, the family has requested that all of those in attendance wear their “Detroit Tigers Gear.” Pastor Roy Southerland will be officiating. Cremation took place through Covenant Cremation, Erie, Michigan.

To send flowers to the family or plant a tree in memory of Christopher Kelly, please visit Tribute Store
Friday
8
April