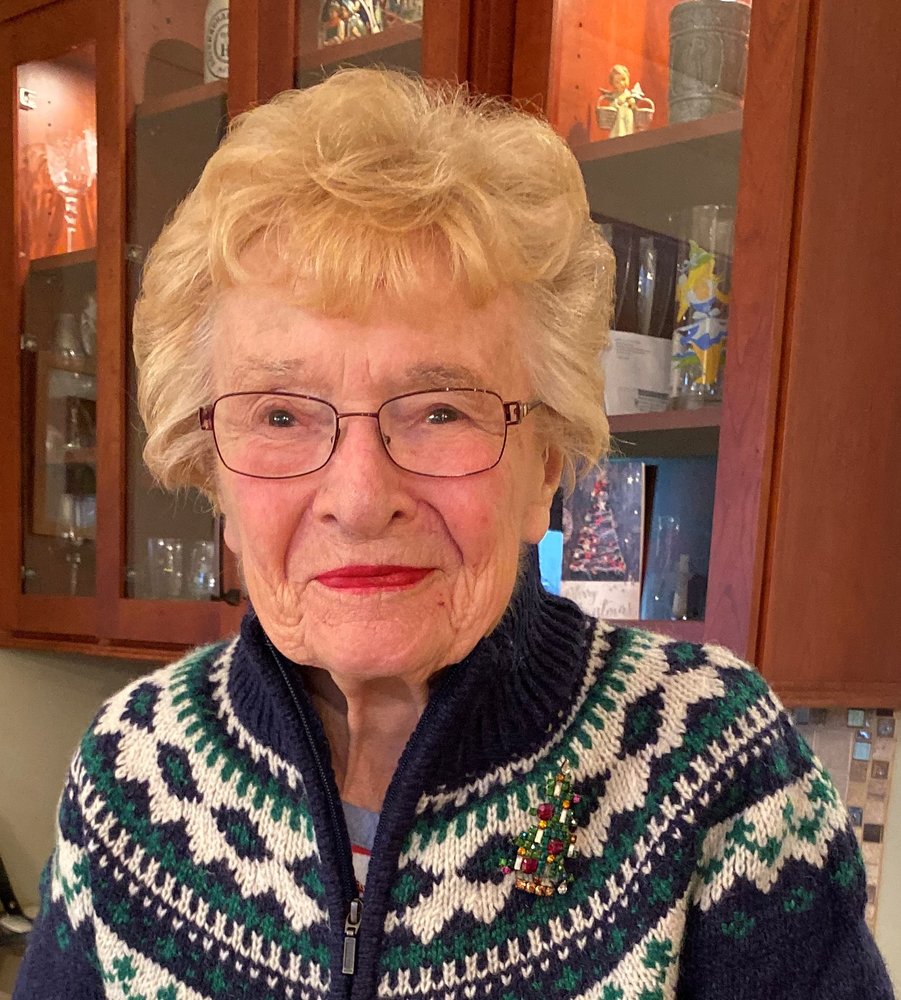 Hildegard Charlotte Savage was born in Monroe, Michigan on November 24, 1927 to George and Hildegard (Schenk) Sailer.  She was raised in a German home and spoke only German until she entered the one-room Keeney School for her elementary education. Hilda went on to St. Mary’s Academy in Monroe and earned a Bachelor of Arts from Mary Manse College in 1949, the first in her family to earn a college degree.  She was proudly a member of the Forty-Niners alumni class, served on the student council and was President of the Glee Club.  She also spoke often of the summer classes she attended at the University of Michigan.  Her love of learning became her career, and “Mrs. Savage” shared this passion as an elementary and music teacher for Mason Consolidated Schools, retiring in 1992. Hilda cherished the relationships she formed with her students over the course of thirty-one years.  She fostered those connections with care throughout her entire life, keeping close track of many students’ lives, careers, and families.  She was as proud of their accomplishments as she was of the achievements of her own family.

Hilda’s love for music extended beyond her role as a teacher. A talented pianist, she led the family in singing carols every Christmas Eve.  She was also known for her competitive spirit and was always up for a game of Scrabble or Canasta.  She enjoyed watching game shows, especially Jeopardy. Hilda loved to travel and was fortunate to have visited her ancestral home of Germany and her many family members there. A social butterfly, Hilda always seemed to run into someone she knew and easily connected with others.  Throughout the trials of her life, Hilda remained optimistic and steadfast on her course, always reminding others that “everything happens for a reason”.  She maintained continuous support of her daughters and family, taking care of her own mother in her twilight years.  She adored her grandsons, great granddaughters, and her heart welcomed and loved her large, extended family.

Hildegard Charlotte Savage, age 93, of Erie, Michigan passed away at Aspen Grove Assisted Living in Lambertville, Michigan on Monday, January 25, 2021, in the arms of family. She was preceded in death by her parents.

Contributions may be made in Hilda’s memory to Notre Dame Academy’s Scholarship Fund.  Hilda made sure that all three of her daughters received an education at NDA, and the family would like to pass that gift on to others.   Notre Dame Academy, 3535 West Sylvania Avenue, Toledo, OH  43623, Attn:  Jim Sulier, Advancement Office.

The family will celebrate Hilda’s life when it is safe to gather, and likewise, inurnment at St. Joseph Cemetery Erie, Michigan will take place at a later date. Arrangements have been entrusted to Merkle Funeral Service, Erie; 9156 Summit Street, Erie, Michigan 48133 (734) 317-7199.