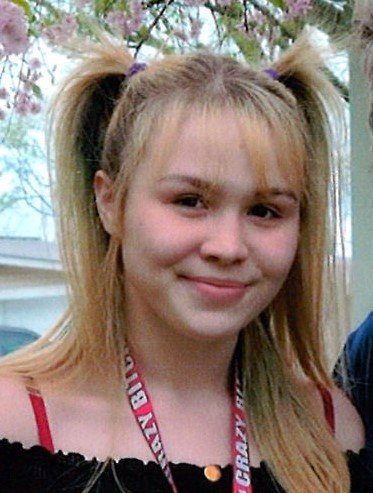 HeavenLeigh Beatrice Theiss was born June 25, 2003 in Toledo, Ohio. She was the daughter of Cherie (Kenneth) Paul.

HeavenLeigh enjoyed putting together puzzles, no matter how many pieces and hanging out with her friends. She was especially talented in piecing three dimensional puzzles together.  When she felt she needed a break, HeavenLeigh would doodle and draw on her chalkboard. She also, on occasion, dabbled in the art of diamond painting which is a combination of cross stitch and paint by numbers using rhinestones applied to a canvas.

It was said HeavenLeigh had an answer for everything. Her responses would always get questioned, but because of her debating talent and infectious smile, she would always win.

Inside and out, HeavenLeigh was a beautiful, loving daughter who was a great help with her younger relatives.  Her family cherished the times they were able to spend together. So many people adored HeavenLeigh, and wanted to be around her always, in fact she was the first crush of her young cousin, Logan.

In her quiet time, HeavenLeigh would watch episodes of Scooby Doo and would love to watch the Tim Burton classic, The Nightmare Before Christmas. She had an extensive collection of trinkets and items for both memorable shows.

HeavenLeigh Beatrice Theiss passed away suddenly on Tuesday September 29, 2020 due to injuries sustained in an automobile accident. In addition to her passing, she was preceded by her grandparents: Ralph and Barbara Theiss and one aunt: Bobbie Jo Morris.

To cherish her memory, Heaven leaves her parents: Cherie and Kenneth Paul; brothers: Aiden and Alec; sisters: Savannah, Destany and Taylor; along with many aunts, uncles, cousins and friends. Most importantly, HeavenLeigh was the Yin to Jonathon’s Yang. She relished being with him and felt they were two halves of a complete whole. Their life was so intense that death could not separate them. John unfortunately, succumbed to his injuries from the accident as well. HeavenLeigh and Jonathon were inseparable in life and they made eternity theirs as they perished together.

HeavenLeigh’s mother, Cherie, would like to thank Lolita and David for the ultimate gift of Heaven’s life so she could be called mama and mom.

To send flowers to the family or plant a tree in memory of HeavenLeigh Theiss, please visit Tribute Store
Sunday
27
September