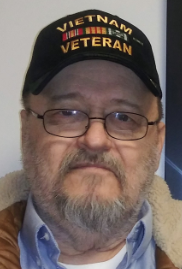 Gary Noel Keck was born in Monroe, Michigan on July 16, 1948. He was born from the union of the late Estil Keck and the late Ruby (Tolliver) Keck. He was a 1966 graduate of Monroe High School and honorably served in the United States Army.   Gary married the love of his life Catherine Mason on April 26, 1975 in Tazewell, Tennessee.  From this union would come the birth of two beautiful children. Gary enjoyed tinkering on cars growing up, ultimately resulting in supporting his family as Owner/Operator of Keck’s Lettering for over forty years.   He received his spiritual nourishment at Monroe Missionary Baptist Church.

Gary had a great sense of humor, was kind and willing to give to those in need.  As an antique collector, Gary relished in thrift stores and garage sales finding treasures to take home or give to his others.   He was an avid war historian often engrossing himself in history books.

Gary was a proud lifetime member of the Veteran of Foreign Wars of Monroe and a certified member of the Sons of the American Revolution.  Being a Vietnam Veteran, Gary had a humbling outlook on life, cherishing his family; spending quality time with them, especially his grandchildren.

Gary Noel Keck, age 72, of Monroe passed away at 12:14pm on Friday, July 31, 2020 unexpectedly at his home.  In addition to his parents, he is preceded by his wife Catherine Keck (1999); four siblings:  Larry Keck, Janice Hatfield, Billy Shackleford and Harold Shackleford; two nieces: Amy Thomason and Christina Lower.

Share Your Memory of
Gary
Upload Your Memory View All Memories
Be the first to upload a memory!