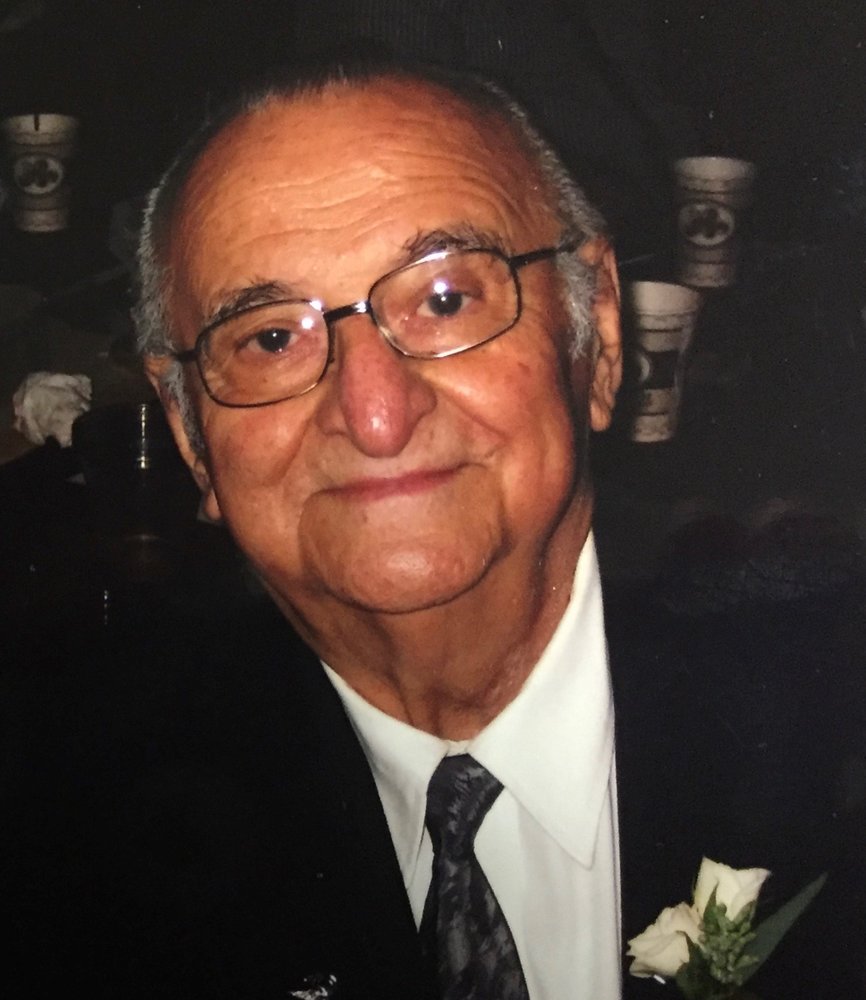 On Thursday, July 9th, we said goodbye to Emil Gessler - Pipi to many of us.  While he lived his final day in his Erie home of over 50 years, his story begins in a small town in Germany, over 4,200 Miles away.

Born on February 5th, 1932, Emil grew up in Untergrombach, Germany with his parents Otto and Betha (Kaiser), and sister Gisela.  Emil was just seven years old when Germany invaded Poland, marking the start of WWII.  His father would soon be called away to war, leaving him as the man of the house before even becoming a teenager.  Although his hometown would see little to no direct combat, its proximity to the French border made it a frequent target for allied forces to drop any remaining bombs before returning into French airspace.  These were dark times to live in Untergrombach, both figuratively and literally, as the town frequently had to ensure that no household lights were used after dark, as they did not want their homes to be targets for the frequent bombing raids.  It was during this time that a young Emil would experience life in a way that very few of us can even begin to fathom.  Imagine being a child, growing up in a home with no lighting after sunset.  Living in a world where going to sleep with your shoes on is standard operating procedure...because when that bomb siren goes off, you won’t have time to put your shoes on before you run down to the cellar to take cover.

While this obviously sounds like a terrifying way to go through childhood, life and the severity of the situations we experience on a daily basis are relative to what we perceive as ‘normal.’  In the early 1940’s, Emil didn’t exactly have access to worldwide news or social media to understand that the conditions of his daily life in this time period were far different than those of his future friends and family already living in the US.  Hearing stories of how he and his childhood friends would turn nearby rain filled bomb craters into swimming pools speaks to the resiliency of the human condition, and the ability to somehow create a positive out of the seemingly bleak conditions of your current situation.  While these terrible situations likely seemed to have no eventual benefit to Emil at the time, they without a doubt had a massive impact on the man he would become, and the unique perspective that only life experiences of that nature develop.

After many nights spent sleeping fully clothed, with shoes on, and the occasional blown out windows from bombs that landed dangerously close to home, the war was finally over.  Emil was 13 years old when the war ended.  Although his father had returned home prior to the end of the war, he was a shell of him former self.  Severe malnourishment and amputation of one of his legs were not the only negative effects of a lengthy stay in a Soviet prisoner of war camp.  A severe head injury, caused by being blown down the basement stairs by the aftershock of a bomb landing nearby, degraded his condition further, and Emil was once again the man of the house.  It was not long after this that Otto would succumb to the traumas that befell him.

Emil would spend his adolescent years in Germany, working multiple jobs to help provide for the family.  Despite being able to find work, life in post WWII Germany was far from paradise, and was not somewhere he would want to raise a family.  Emil had dreams of something greater, and would eventually pack up those dreams and move across the globe to the United States at age 21.  Sponsored by Bernard and Lucille Cousino of Erie, MI, Emil made the move to the United States in July of 1953.

Emil’s first day in his new home involved some confusion when he was shown the ‘city center’.  The lack of buildings and any sort of bustling downtown area had him scratching his head.  After struggling with the language barrier between Bernard and Emil, who spoke very little English at this point, it became clear that Emil had been expecting to make his new home in Erie, Pennsylvania.

Despite the initial confusion, Emil quickly became fond of the small town of Erie and it was not long before he met the love of his life, Patricia Ann Cousino.  Emil and Pat were married in 1957.  Emil decided to quickly show his love for his new country by enlisting in the US Army, and the young couple were stationed at Fort Bragg in Fayetteville, NC.  It was here that they would have their first child, Michael.  Emil was not in the Army long before his fellow soldiers and commanding officers recognized his skills in the kitchen.  Emil would serve the remainder of his time at Fort Bragg as a cook, much to the benefit of the other soldiers stationed there.

Emil became a US citizen in 1959, and after being stationed at Fort Bragg, was honorably discharged.  The young family moved back to Erie, where they would have an additional three children; Michelle, Mary, and Emil.  After moving back to Erie, Emil worked varying jobs, including working as an electrician, and a short time as a restaurant owner, where he quickly recognized that the demanding nature of running a restaurant was not going to result in a happy family at home - which was always a priority to him.  He would later work for Teledyne Cae in Toledo, Ohio, supervising the testing of new turbine engine technologies.  Emil enjoyed his time at Teledyne and often reflected on the constant new challenges that working with sophisticated equipment brings.

While he enjoyed his work with Teledyne, his service to the Erie Volunteer Fire Department was his passion, and would lead to the development of friendships that would last his entire life.  Emil served as a volunteer firefighter for the majority of his adult life, before becoming an honorary member.  Even after stepping down from the role of responding to local emergencies, Emil stayed extremely active in the Fire Department, helping with organizing fundraisers for local causes, or for the needs of the fire department itself.  Much of his help was performed in the kitchen, where Emil ran the show during wild game dinners or pancake breakfasts.

Emil spent much of his free time up at Portage Lake with close friends and family.  Anyone who experienced a weekend at the lake, with Emil and his friends, knows that they knew how to have a great time.  Most of the weekends were spent fishing, playing cards, singing, and having the occasional drink or three.  In addition to the times spent up at Portage, Emil was able to take many trips with his close friends from the fire department, ranging from hunting, fishing, golfing, or any other excuse they could use to get together and have a good time.

When not working or spending time with friends, Emil like to spend time at high altitude, flying the plane that he co-owned with friends.  Emil was able to earn his pilot’s license and would take to the air as often as possible.

After retirement, Emil and Pat were both heavily involved in the life of their grandkids.  Spending time on the pontoon boat, learning how to fish for bluegill while using cane poles with Pipi, as his grandkids knew him, was a rite of passage.  Pipi patiently dressed thousands of hooks, untangled an unimaginable number of fishing line nightmares, and was able to get the occasional chuckle out of a grandkid being smacked in the face by a bluegill after pulling the fish out of the water with a bit more excitement than needed.  After fishing during the day, the kids would retreat inside and play one of the seemingly endless list of games that Pat, or Mimi as her grandkids knew her, seemed to have up her sleeve.  While Mimi entertained with games and jokes, Pipi was busy cleaning fish for an eventual fish fry for dinner.

Mimi and Pipi would play host to the entire family on almost every holiday, and even on some made up holidays, as Mimi was always looking for an excuse to put a smile on the face of her grandkids with her latest garage sale finds.  Some of those nights turned into sleepovers for the kids, all of which were followed by a morning of waking to the smell of bacon and one of Pipi’s delicious breakfasts.  Pipi found time to participate in other grandchild activities including Pinewood Derby, Science Olympiad and he never missed a birthday party.

Emil’s previously mentioned cooking was a major highlight of any family function.  As many of you reading this know, there are people out there that would be willing to pay upwards of $20 per pound for Emil’s German Potato Salad.  Many have tried to the duplicate the results with what Emil considered his ‘recipe,’ but you only had to watch him make it once to see that the ‘recipe’ was more of a set of general guidelines.  Every batch was made to taste, and Emil’s taste for his own potato salad is not something easy to mimic.  Often imitated, but never duplicated.  A close second in popularity to Emil’s potato salad were his landjaegers (German sausages).  Much to the delight of his family and friends, Emil made these often.  Emil would hang the sausages to dry on a rack in the garage.  The rack was very conveniently located on the path into the house.  For those of us that enjoyed them, one did not simply walk into Emil’s house without first grabbing a landjaeger off the rack.  Whether it was a simple meal for a small group, or catering for a graduation party, we all trusted in Emil to keep our bellies full, and he never let us down.

Emil lived his final days in his Erie home of over 50 years.  Emil’s difficult childhood gave him a unique perspective on the world that very few of us could ever fully comprehend, but we can all appreciate.  His list of life experiences is even more fascinating than it is long.  Most of us were born and raised in the United States and could only read the stories of immigrants moving to the US and building a live for themselves by seizing every opportunity that was presented to them.  Emil was a living, walking, breathing example of the American Dream realized.  He turned all of his experiences into a beautiful life and he was able to have a positive impact on so many people.  A life well lived, and one to take pride in.  He will be missed by many, but his words of wisdom and the ever engaging stories of his life will live on in the minds of countless friends and family.

There will be a private celebration of Emil’s life on Monday July, 13th at the Erie VFW Pavilion.  Friends and family will be welcome to join in celebration of Emil’s life from 5 to 7 PM.  Due to the current unfortunate situations we are living through, we ask that everyone please wear a mask and abide by social distancing practices during the celebration.  As a precautionary measure, food will not be served during the celebration – and also because Emil is not here to cook for all of us. In lieu of flowers, we ask that any donations be sent to the Erie Volunteer Fire Department.

Share Your Memory of
Emil
Upload Your Memory View All Memories
Be the first to upload a memory!