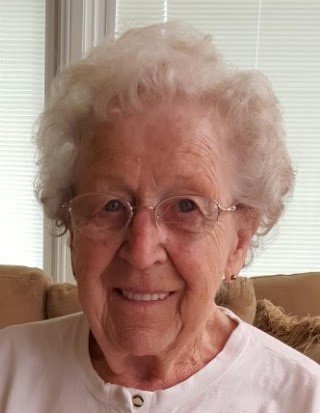 Dolores Lamley was born to David G. and Forestin (Rodeslier) Lamley March 14, 1924 at the family homestead on Lamley Lane, Blissfield. She was a 1941 graduate of Blissfield High School and married Leon E. Spaulding on February 27, 1943 at Brownwood, Texas while stationed at Fort Hood Army Base prior to WWII. They made their lives in Dundee and later in Petersburg taking pride in having built five homes together.   Dolores had been employed at the Willow Run Bomber Plant in the drafting department during WWII and later at Dundee Products and Xerox.

Dolores received her spiritual nourishment as a member of St. John Lutheran Church and keeping active with the Women’s Circle and as a member of the Dundee Senior Citizen Center. She was kind, conscientious and passionate; loved by all who knew her. Family was most important to Dolores, always looking forward to time spent with them at events and holidays, especially her grandchildren and great-grandchildren. She was a woman of many talents as an avid seamstress making clothing, draperies, and costumes.  Her wonderful baking delicacies and her well known German Bread will be missed by many.  Dolores appreciated the outdoors in her flower garden and bird watching.

Dolores F. Spaulding, age 96, passed away at 2:27am at Blissfield Place Assisted Living under hospice care of Careline Health Group. In addition to her husband, Leon of seventy years, she is preceded by her parents and her siblings:  Rachel Rogers, Charles Lamely, Joanne Seegert and Even Lamely.

Memorials are suggested to St. John Lutheran Church or Dundee Veterans Memorial. Online guests may leave words of comfort and inspiration, or share a photo by visiting www.merklefs.com.