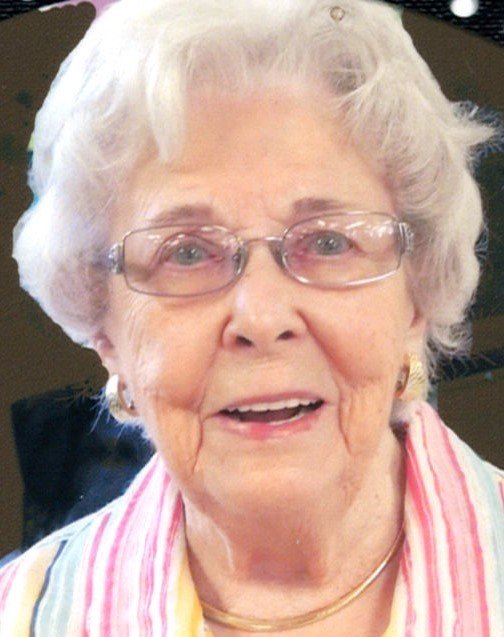 Lola Mae Cousino was born November 24, 1925 in Erie, Michigan. She was one of two children from the union of Ezra and Naomi (Fuller) Cousino. After graduating from Monroe High School, Lola would marry Roger L. Santure and they would be blessed with three children. The family would make their home on the family farm in Erie. Lola would often say “I’ve moved three times, but never left the farm”, because their houses were built on the same, but different areas of the farm.

Being a homemaker and caring for her children was always a priority for Lola, however, after her children started school, she would find work as a librarian at Erie Township Library. Later, Lola would also be employed as a secretary at Erie Mason Junior High School.

After marriage, Lola taught herself how to sew and enjoyed making clothes for her children and family. Lola really relished reading, especially mystery and detective stories. Even until her passing she was still borrowing books from the library.

She enjoyed playing cards; euchre and pinochle were her games of choice. Monroe Senior Center and Luna Pier and Bedford Senior Center were her hot spots to participate in these friendly games. On occasion, Lola would take a trip to the Casino with other local seniors. She was a lifetime member of the Auxillary to the Veterans of Foreign Wars Post 3925.

Lola Mae Santure, age 94, of Erie passed away at 3:04pm on Sunday; March 1, 2020 at her home.   In addition to her parents her passing was preceded by her husband, Roger L. Santure; a son: Bradley; and a sister: Helen Kozlowski.

In lieu of flowers, memorials may be made to Friends of Companion Animals friendsofcompanionanimals.org and Hospice of North West Ohio Hospicenwo.org. Online guests may leave words of inspiration and comfort or share a photo by visiting www.merklefs.com.

Share Your Memory of
Lola
Upload Your Memory View All Memories
Be the first to upload a memory!