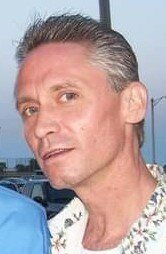 Please share a memory of Eric to include in a keepsake book for family and friends.
View Tribute Book

Eric Russell Webb Drew was born in Toledo, Ohio on September 15, 1966.   He was the only son of three children born from the union of Thomas "Tom" Russell and Leonora "Ann" (Webb) Drew.   He attended Ida High School graduating with the Class of 1985.  He later attended Monroe County Community College earning his welding certificate.

Eric was employed by the Local prior to taking a position with the Ford Motor Company at their Monroe plant for nine years.   He married the former Mary Cris Clark on May 6, 1995.   For many years he was active in the family business, Great Lakes Skateway on South Telegraph Road.   His true passion, however, was that of Sulky Harness Horse Racing.   He was a self-employed trainer alongside his father, operating a training facility off of East Dunbar Road in Monroe Township, even having a pool in which to break horses.   They enjoyed racing their own horses at Raceway Park in Toledo as well as tracks in Northville, Saginaw, Cleveland and Canada.

Eric was extremely patient and understanding which made him very good at his chosen career path.   He took the most pride in this life, however, in being a father.   Eric wouldn’t hurt a fly and was very compassionate often playing the “Good Cop” role very well when it came to enforcing the rules.   While his son, Webb, was involved with Boy Scouts, Eric, was right along supporting the entire experience.  He was in fact devastated when Webb chose not to advance to Eagle Scout.

Soft spoken and sensitive, Eric, enjoyed HAM radio.   He was intelligent beyond his years maintaining a plethora of information.   He prided himself on staying up to the minute with current events, often tuning in to CNN, and being knowledgeable about world history.   He loved to work with his hands tinkering and fixing things, even when they didn’t necessarily need it.   He loved to spend time with his two cats, and was known to be quite funny and very sarcastic.

Eric Russell Webb Drew, age 55, of Monroe passed away in the home of his children and the love of his life, Cris on Saturday; September 10, 2022 from cancer   His passing was preceded by a daughter:  Paige Christine his paternal and maternal Grandparents, and his father-in-law:  Robert Clark

Friends may gather from 3:00pm until 6:00pm om Thursday; September 15, 2022 at Merkle Funeral Service, South Monroe; 14567 South Dixie Highway; Monroe, Michigan 48161 (734) 241-7070.   A Celebration of His Life will follow at 6:00pm also at Merkles with Bob Aultman officiating.   Cremation has taken place through Covenant Cremation of Erie and private burial of his cremated remains will take place at St. Joseph Cemetery in Monroe.

Memorial donations for those who desire are suggested to Friends of Companion Animals or Oaks of Righteousness.   Online guests may leave words of inspiration and comfort or share a photo by visiting www.merklefs.com.

To send flowers to the family or plant a tree in memory of Eric Drew, please visit Tribute Store
Thursday
15
September