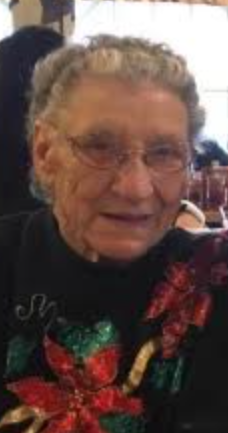 Mary Jo Seals was born on November 4, 1935 in Tazewell, Tennessee.   She was one of five children born from the union of Edgar Seals and Birdie Bee (Griffin) Seals.   She was educated in Tazewell prior to moving to Michigan in the mid 1940’s.

She married Thurman Lovell in Kentucky on December 26, 1953.   The couple were blessed with five children of their own.   Mary moved to Woodland Beach in 1973 where she made her home until her passing.   She worked at a local hotel in Monroe on Telegraph Road for several years performing cleaning and janitorial work.   She then took a position with Monroe Convalescent Center as a Nurse’s Aide where she remained for the next twenty years.

Mary was a tough cookie in spite of her small stature.   She was the matriarch of her family and didn’t take crap from anyone.   Mary loved all family unconditionally and was willing to go to blows to defend someone she cared about.   In fact, at one time or another every member of her family from child to great grandchild had made their home with her, and since she was ornery, she would always complain about having house guests but her door was always open.   She was quite the collector from receipts to paperwork, angels, and pigs, she kept everything.

She loved to play bingo, anywhere she could, although she locally frequented St. Anne's Church, the Oddfellows, and the Knights of Columbus Hall.   Mary also looked forward to casino trips to play the slots, and loved girl’s night, when she would be joined by Diana Lovell, Joy McMullen, Theresa Wilson, Samantha Bomia, Lacy Bergmooser, Judith Madej, and Bev Benore to name a few.   She was an avid sports fan constantly cheering on her hometown teams the Detroit Red Wings, Pistons, and Tigers.

Mary Jo Lovell age 86, of Monroe passed away at home on Tuesday; February 1, 2022.   Her passing was preceded by her parents; her beloved husband:  Thurman on March 21, 1994; two sons:  John Lovell in 2006 and David Lovell in 1989; a sister:  Carol Carter in 1991; a granddaughter:  Shelby Lynne Lunsford-Dussia; and her close friend whom she was a caregiver to for more than fifteen years, Larry Everett LaPointe on December 5, 2021.

To send flowers to the family or plant a tree in memory of Mary Lovell, please visit Tribute Store
Saturday
12
February