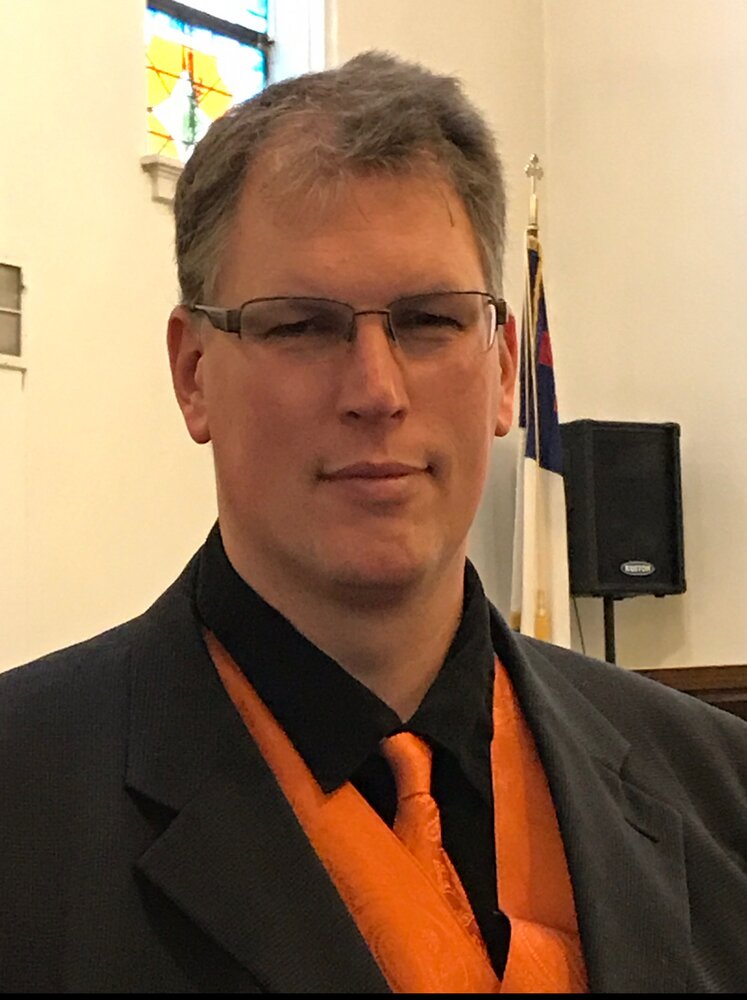 Benjamin Allen Brown was born in Coldwater, Michigan on January 18, 1974.   He was the eldest of six born from the union of the Reverend Don Allen Brown and Pamela Joy (Herman) Brown.   Benjamin was home schooled through high school and it is here that he was taught about the love of Jesus Christ, whom at a young age he asked to be his Savior.   Ben would continue his education eventually obtaining his Associates Degree in Pastoral Theology from MidWestern Baptist College.

Ben married the former Michelle Dawn Keefer and from this union the couple would be blessed with eight children.   He married Sarah Christin Berlin on June 16, 2018 and would have the joy of a ninth child.   He loved his wife and children emphatically.

Ben was a hard worker and an excellent provider for his family most recently employed by Ecolab as a Territory Representative.   While pastoring Alpena Baptist Church, Ben worked multiple jobs sometimes 60-70 hours each week beyond his pastoral duties and yet still found time to be with his children.   Ben had a wonderful sense of humor and a joke for every occasion.   He was a self-proclaimed “Pulpiteer”.   Traveling with his work, he filled in at numerous church pulpits across the state, wherever pastors had a need.

For the past ten years he made his home in Gaylord where he was an integral part of the ministries at Grace Baptist Church under Pastor Derek Hagland.   The radio ministry was his true passion, his Bible Trivia and alter ego Skippy the Scottish Squirrel were both call-in children’s show favorites.   He loved to sing, lead Junior Churches, and Children’s Ministry.   One thing that was certain is that Ben always gave 100% while serving.

Ben challenged himself each year to give more financially to the church than the year before.   He often went without himself to make sure that the church had what it needed.   Ben continued to give God the glory, knowing that his own generosity was beyond what he should be able to comfortably provide.

Just like the Apostle Peter, Ben, was known for his bold convictions.   Although, he never made others feel bad about their own beliefs he was truly passionate about his own.  He loved to read and collect books, with many old titles being scattered throughout the home.   He was a fan of Lord of the Rings.

Ben believed in the power of prayer.   Each Sunday morning, he texted more than 275 individuals to send them spiritual encouragement, assuring each of them, "you are loved and prayed for".   Following the passing of his father he took over as the patriarch of the family, calling his mother at 5:30am every morning to read Proverbs together.

Benjamin Allen Brown, age 47, of Gaylord was called to his heavenly home on Monday; January 10, 2022 at Otsego Memorial Hospital in Gaylord.   His passing was preceded by father Don Allen Brown; grandparents; and paternal uncle:  Kim Brown.

Friends may gather on Friday; January 14, 2022 from 12:00pm until 2:00pm at Calvary Baptist Church; 318 Riley Street, Dundee, Michigan 48131.   A Celebration of His Homegoing will take place at 2:00pm on Friday also at the church with Pastor Edward Hall and Pastor Derek Hagland officiating.   Procession will follow to Maple Grove Cemetery for burial.   A dinner will be held in the Jackson Memorial Building immediately following cemetery committal services.   Merkle Funeral Service, Dundee; 297 Tecumseh Street, Dundee, Michigan 48131 (734) 529-3156 has been entrusted with his care.

In lieu of flowers memorials are suggested to Grace or Calvary Baptist Churches.   Online guests may leave words of inspiration and comfort or share a photo by visiting www.merklefs.com.

To send flowers to the family or plant a tree in memory of Benjamin Brown, please visit Tribute Store
Friday
14
January