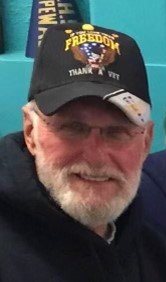 David Allen Hayford was born in Monroe on February 5, 1949.   He was the eldest of two boys born to Gerald Allen and Geraldine (Rains) Hayford.   He attended Ida and Custer Elementary Schools before graduating from Monroe High School with the Class of 1967.

David was married by the Reverend Al Jukuri to the former Joyce Ann Yantz on January 6, 1968 at the Assembly of God in Monroe.   On February 5, 1969 he was drafted into the United States Army.   David served his country as a member of the Military Police and was stationed in Germany.   He was honorably discharged in 1971.

David took employment with ProMedica Health System.   Being extremely knowledgeable and well-respected, David, over time became the Director of Facilities.   He retired on December 31, 2013 after thirty-nine years of service.

David and Joyce were active members of Redeemer Fellowship Church.   David served as an usher, often lending his knowledge with finances, and used his immense capabilities with the building committee.   The couple enjoyed traveling and camping, and David loved to hunt and fish.   He often rode his Yamaha motorcycle and was a proud member of the Patriot Guard.   He loved to socialize and made friends wherever he went.

David had a passion for photography.   He liked to take pictures of wildlife and natural settings.  His favorite subjects were hummingbirds.   David was generous with his work often giving it away.

More than anything in this world, David, was proud of his children and grandchildren.   He was very active in their lives attending their events and photographing their accomplishments whenever he could.

David Allen Hayford, age 72, of LaSalle passed away on Tuesday, April 13, 2021.   His passing was preceded by his parents and just nine hours later he was joined in Heaven by his younger brother:  Pastor Dale Hayford.

Friends may gather from 3:00pm-8:00pm on Friday; April 16, 2021 at Merkle Funeral Service, South Monroe; 14567 South Dixie Highway, Monroe, Michigan 48161 (734) 241-7070.   Members of the Patriot Guard will form a flag line detail.   He will lie in state from 10:00am-11:00am on Saturday; April 17, 2021 at Redeemer Fellowship Church, 5305 Evergreen Drive, Monroe, Michigan 48161.  A Worship Service Celebrating His Life will take place at 11:00am with Dr. John Piippo and Pastor Ted Conover co-officiating.   Procession will follow to LaSalle Township Cemetery for burial where graveside services will be under the auspices of Monroe Veteran of Foreign Wars Post 1138.

Memorials are suggested to any local veteran’s organization.  Online guests may visit www.merklefs.com.

To send flowers to the family or plant a tree in memory of David Hayford, please visit Tribute Store
Friday
16
April