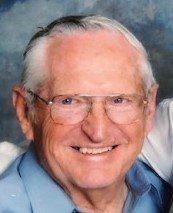 It is with profound sadness that we announce the passing of Richard (Dick) Roy Hartman of Dundee, MI on April 16th, at the age of 89 after a lengthy illness.  He was born June 18, 1930 in Petersburg, MI.  He married the love of his life Kathryn (Laberdee) Hartman on April 18, 1953.  He passed 2 days shy of their 67th wedding anniversary.

Dick always looked to the sky because he loved planes, including flying small ones.  We remember Sunday mornings after church going to Detroit Metro Airport to watch planes take off and land, as well as attending many air shows.  He loved an occasional martini or beer, fishing, playing his harmonica, playing cards, golfing, dancing, bowling, and camping (Kettle Hoppers).  Before and after retirement Dick and Kate would spend time in Florida during the winter, and in the summer near the Soo Locks to watch the boats and walk the bridge.  After retirement they took a 3-month trip to Alaska in their motorhome.  Most of all he loved being with family and friends.

Dick was an electrician all his life, beginning his career at Revco in Deerfield (20 years).  He retired in 1989 after 20 years in the High Voltage Department at the University of Michigan.  Dick had his own company "Hartman Electric", wiring many homes and businesses in Dundee and the surrounding areas.  He could not have been prouder that his son Dennis chose to follow in his footsteps.

The Hartman Family wants to thank all of Dick's many caregivers over the last several months (Kelly, Edna, and Agnes), Reliable Home Care, his aides and nurses from Hospice, and the staff at Hampton Manor.  We will be forever grateful you allowed us more time with him.  We also thank all of our family and friends who have provided comfort and support these last several months.

In lieu of flowers, please consider a donation to the Parkinson's Foundation, the Lupus Foundation, or Monroe County Promedica Hospice.

We need to add two more sentences to the very end.   Please add: