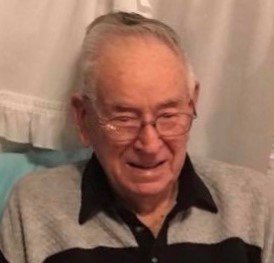 Charles Andrew Rice was born in Mousie, Kentucky on March 2, 1929.   He was one of five children born from the union of the late Millard and Ida (Hicks) Rice.   On January 3, 1948 in Paintsville, Kentucky, Charles would take the former Virginia Slone to be his wife.   In 1950, the young couple would move to Michigan settling in Monroe where they would raise their family.

Charles would take employment with the Ford Motor Company.   He would work as a repair welder for over thirty years to provide for his family.

Charles enjoyed being outside and often tended to his garden.   He was very gifted with his hands and was a talented woodworker creating beautiful birdhouses, benches, and even rocking horses for all his grandchildren.

Watching basketball was one of his favorite pastimes.   He enjoyed rooting on his Kentucky Wildcats and also the Detroit Pistons.   During the Summer months he often would watch his beloved Detroit Tigers on the television.

Charles Andrew "Pap" Rice, age 90, of Monroe passed away at home on Saturday; February 8, 2020.   He was surrounded by his loving family and had been under the care of Elara Caring Hospice.   In addition to his parents his passing was preceded by his bride of more than seventy-two years:  Virginia, two days before; his four siblings; and one granddaughter:  Allison LaRoy.

Friends may gather from 2:00pm until 8:00pm on Friday February 14, 2020 at Merkle Funeral Service, North Monroe; 2442 North Monroe Street (734) 384-5185.   A Celebration of His Life will take place at 11:00am on Saturday, February 15, 2020 also at Merkle’s with Reverend BJ McDaniel pastor of One Way Christian Fellowship officiating.   Procession will follow to Roselawn Memorial Park in LaSalle for burial.

Gathering for Charles and Virginia Rice

Celebration of Life for Charles and Virginia Rice