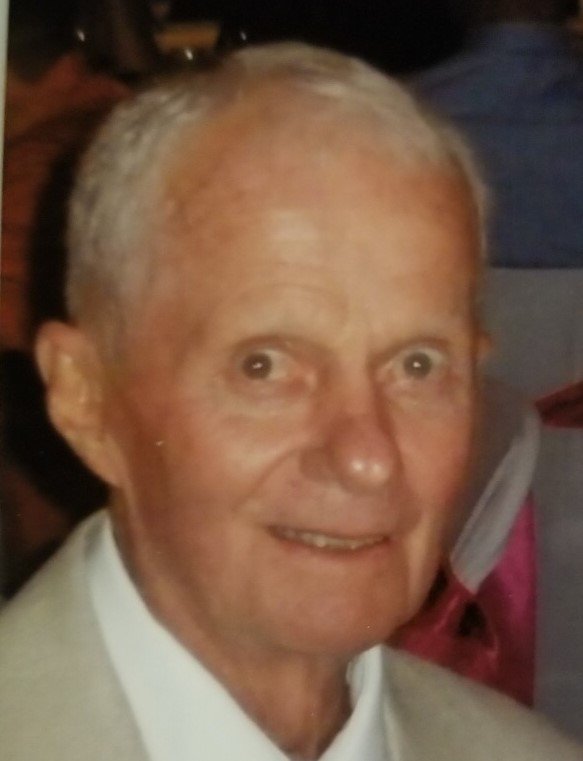 Richard (Dick) Duane Keinath was born in Dundee on April 26, 1926.   He was one of four children born from the union of the late Hazen and Lucille (Hemenway) Keinath.   Dick attended Dundee schools graduating with the Class of 1944.   He enlisted in the United States Navy and served his country honorably from 1944-1946.

Dick married the love of his life the former, Joyce Burgess on June 3rd, 1950 in Dundee.   For 42 years he supported the needs of his family with employment at Tecumseh Products.   After retirement, Dick spent an additional twelve years as a school bus driver for Dundee Community Schools.   He often considered this to be the favorite period of his life.

He loved his hometown and could often be seen riding his bicycle around.   Dick also loved to play golf and was so prideful to teach his grandson Joshua how to play when he was 4 years old.   Their favorite course was Dundee Golf Club, where he was happy to have his 90th birthday celebration.

Dick was an active member of St. John Lutheran Church.    He served in many different capacities, even helping to roof the church.   Dick also was a state champion bowler.   He enjoyed woodworking, gardening, hunting, fishing and had even built his own home.   He was an avid Dundee Schools sports fan often sharing his sports outings with his grandson.

Dick had shared his home with many four-legged companions, all of whom were black labs.   He enjoyed visiting his daughter in Arizona whenever he was able.

Richard, age 93, of Dundee passed away at home unexpectedly on Saturday, January 18, 2020.   In addition to his parents his passing was preceded by his beloved wife Joyce; two brothers:  William and Jack Keinath; and two sisters-in-law:  Jane and Jackie Keinath.

Friends may gather at Noon on Wednesday, January 22, 2020 at Maple Grove Cemetery. Graveside services will be under the auspices of Dundee Veterans Memorial Guard and officiated by Pastor Jen Kiefer of St. John Evangelical Lutheran Church.   Arrangements have been entrusted to Merkle Funeral Service, Dundee; 297 Tecumseh Street (734) 529-3156.

To send flowers to the family or plant a tree in memory of Richard Keinath, please visit Tribute Store
Wednesday
22
January