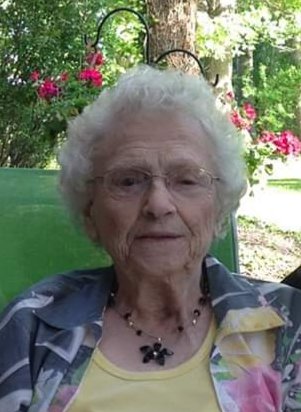 Ruth resided in Jackson, Michigan from age six until her graduation from Jackson High School. She then furthered her education at a two-year “finishing school” in Nashville, Tennessee and earned a bachelor’s degree at Denison University in Granville, Ohio. Later earning her master’s degree at Eastern Michigan University, Ypsilanti. Obtaining a college education was quite the accomplishment for her time but Ruth was following in the footsteps of her parents, who were both college graduates.

On December 15, 1945, she married the love of her life, Earl Hochradel, they were blessed with two sons: John and Tom. While she did work for Consolidated Paper for some time, Ruth stayed home to care for their sons. The exception was during the 1960’s, when she worked as a math teacher at St. Mary Academy in Monroe. Ruth was one of the first lay people to teach at the all-girls Catholic high school that was run by the Sisters, Servants of the Immaculate Heart of Mary. She loved her time teaching and mentoring young girls in the studies of algebra and geometry but also the lifelong friendships she made with the Catholic sisters she worked with.

When asked about the interesting times in her life, Ruth remarked about the progression in everyday technology. The technology that truly amazed her was global positioning systems and navigation. “GPS just fascinates me more than computers” she said “I just think that’s the most amazing thing”.

Ruth Elizabeth Hochradel, age 100, of Monroe passed away in the comfort of her home on Tuesday, November 5, 2019 with her family at her side. Her passing was preceded by her parents:  Fredrick and Leah Pinkham; and her brother:  Jim Pinkham.

A memorial service will take place at a later date.