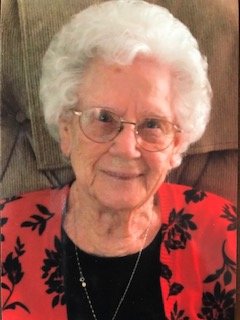 Minnie Marie Butler was born January 22, 1921 in Monroe.   She was the second oldest of seven children born from the late Roy and Lavina (Bosenbark) Butler Sr.   Minnie attended Monroe High School.   She would marry the love of her life, Nolan Ridner, on August 14, 1937 in Erie.

Minnie and Nolan would be blessed with the birth of four children:  Nolan Jr., Gerald, Beverly, and Janice.   During World War II, Minnie, supported the efforts state-side while working as a welder at the Willow Run Bomber Plant.   She was a devoted wife and mother, and later had been employed at a cannery in Dundee.

The young family attended Zion United Methodist Church in LaSalle where, Minnie, would teach Sunday School for many years.   As the children became older, she would take employment for eighteen years with Mason Consolidated Schools as a Bus Driver.   She enjoyed participating in senior bowling leagues for many years.   The couple was married nearly sixty-six years when Nolan passed away on June 6, 2003.   Minnie would make her home at Mable Kehres Apartments for several years enjoying activities there.   She most recently made her home with daughter, Beverly in Fort Wayne, Indiana since 2011.

Memorials for those who desire are suggested to The Wounded Warriors Project.   Online guests may leave words of inspiration and comfort, share a photo, or send a floral arrangement by visiting www.merklefs.com.