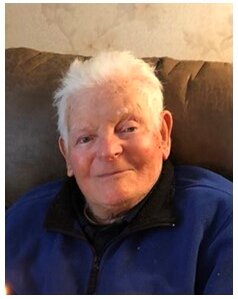 Please share a memory of John "Jack" to include in a keepsake book for family and friends.
View Tribute Book

John Charles Marshall was born on March 1, 1925, in Denaby, England.  He was one of four sons born from the union of Clarence and Edith (Wingrove) Marshall.  Jack grew up in Conisbrough, a small town in the industrial region of England.  Young Jack loved to play ‘over the fields’ with his mates.  Later he became an avid cyclist, riding to many a destination.

Adhering to the customs of that day and age, Jack started work at Cadeby Pit coal mine at age 14. Over the years, Jack became a ‘fitter’ and eventually knew everything about how a coal mine works and how to fix it when broken.

In his early 20’s, he purchased his first motorbike and was truly in business.  He had an absolute love of all things motorbike; riding, traveling, repairing.  One of his favorite passions was going each year to the Isle of Man to watch the TT races with his mates.  Those were the golden years of motorcycling and Jack was in his element.

Through a close friend, Jack met Marjorie and fell in love.  They were married in 1955.  He and Marge moved to Doncaster and started a family.  They were blessed with two children and soon ‘motorcycle Jack’ became ‘family man Jack’.  He regularly worked extra shifts to save enough money to take the family camping on summer holidays to Cornwall (England), France, Italy, Switzerland, and Spain.  Jack thoroughly enjoyed his family life and loved to reminisce about all the  wonderful times and places those glorious days produced.

In 1967, the Marshall family moved to America and Jack found employment at Ford Motor Co.  in the skilled trade of ‘machine repair’.  The family made Carleton their home and it has been so ever since.  There he took to his work, gaining the respect of co-workers and management.  He made many new friends of all nationalities; American, English, Scotch, Welsh, German, and Polish.  Jack took great pride in doing yardwork and planted many specialty apple trees.

After retiring in 1987, Jack took to building a model train set as a hobby.  He spent many a happy hour at that in set construction and operating the trains.  During winters, he and Marge went to Florida as snowbirds.  They found a wonderful site in Umatilla which they returned to for many many years.  Jack and Marge enjoyed the weather, making new friendships, participating in activities, and many good times.  It was there that Jack took up oil painting, a hobby which would become a true passion for the remainder of his life.  Quaint cottages, quaint villages, and steam trains were among his favorite subjects.

Throughout his whole life, Jack was an avid reader.  You name it, a good book, a topical newspaper article, a magazine, if it sounded interesting, he would read and absorb it.

Jack loved to share his life experiences and stories with visitors.  Even in Jacks very elderly years, his recollection of people, places, and the stories behind it was unsurpassed and he would recount a story about the coal mine, or World War II, or anything that would take you there with a richness of detail as if you were there with him.  In his later years, one of his favorite expressions was to say ‘just sit down and have a talk’.

John “Jack” Marshall, age 97, passed away peacefully at his home on November 9, 2022.  His passing was preceded by his parents; his wife of nearly sixty-two years (Marjorie); and two of his brothers, Herbert and George.

To send flowers to the family or plant a tree in memory of John "Jack" Marshall, please visit Tribute Store
Wednesday
16
November