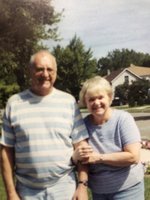 Gloria Lindhorst was born in Monroe, Michigan on September 29, 1937.   She was one of two daughters born from the union of the late Ervin and Dorothy (VanDeventer) Lindhorst.   Gloria graduated from Dundee High School with the class of 1955.

After graduation, Gloria would take employment at the University of Michigan, as an administrative assistant in the psycho linguistics department for nearly seventeen years.   Gloria appreciated the City of Ann Arbor while working there, even looking forward to attending University of Michigan football games.

As a dedicated woman to her faith, Gloria received her spiritual nourishment with regular attendance at St. Irene Catholic Church in Dundee.   A lifelong resident of Dundee, most recently she moved to Port Huron only to be near her son and his family.   As an incredibly independent woman, Gloria’s son made sure she could maintain her freedom even after the move.

She enjoyed playing board games, especially Yahtzee and on occasion, she would exercise her mind by completing crossword puzzles.   In her quiet time, Gloria enjoyed reading and even up until a few weeks ago would delve into a good book.   She took great delight being outdoors, she particularly liked bird watching and visiting the Lake in Port Huron.

Gloria was a devoted and loving wife of more than fifty-five years to her high school sweetheart, Joseph.   He passed in September of 2008.  Above anything, Gloria treasured the times she spent with her grandchildren, being at her happiest when she was with them.   She valued get-togethers with friends, whether they were meeting for lunch or just catching up with conversation.

Gloria Mannlein, age 83, of Dundee, passed away on Wednesday; April 21, 2021 at Marwood Manor in Port Huron with her attentive son at her side.   Her passing was preceded by her parents, her husband and sister: Rita Thompson.   To cherish her memory, she leaves her son:  Chad (Andrea) Mannlein of Burtchville, Michigan and two grandchildren: Henry Mannlein and Emilia Mannlein.

Memorial donations may be made to: University of Michigan Parkinson’s Research at:  http://victors.us/gloriamannlein