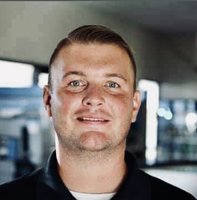 Bryan Michael Riggs was born on July 13, 1984 in Trenton, Michigan. He was the eldest of three children born to Dion Riggs and Cheryl (Grabetz) Riggs. He attended St. Mary’s Catholic Central High School in Monroe where he was a member of the football team. Upon graduation in 2002, he continued his education at Monroe County Community College.

Bryan was employed by Guardian Glass in Carleton for twelve years before moving to Alamogordo, New Mexico where he worked as an auto salesman at Desert Sun Motors for the past two years.

Although Bryan had moved out West to be near his brother, his heart was back home in Michigan. The deep love he felt for his family inspired him to phone his mother and sister every single day and his father faithfully every Sunday. A “gentle giant” who gave the best hugs, he adored his niece and nephews. Despite being six years older, Bryan had a strong connection with his brother Tommy, even sharing a secret handshake. He loved to eat but left the cooking up to Tommy. Bryan seemed to have a sixth sense, always waking up from his afternoon nap just in time for dinner! Both Bryan and Tommy spoiled their sister, Kate. They were her protectors and confidants. The three of them together had an inseparable bond. He also had a special relationship with his cousins and was very close to his Grandma Doris, who would plan outings together with all the grandchildren. An avid fan of all the Detroit sports teams, Bryan was so knowledgeable about the games that he should’ve been a commentator.

Bryan had a calm and empathetic nature, never hesitating to lend a sympathetic ear to anyone in need. A “rescuer” to all, he loved animals and would take in any stray that crossed his path.

Friends may gather on Thursday, April 29, 2021 from 3:00pm until 7:00pm at Merkle Funeral Service, North Monroe; 2442 North Monroe Street, Monroe, Michigan 48162 (734) 384-5185.   A Worship Service Celebrating His Life will begin at 7:00pm. Due to the Covid-19 pandemic and the State of Michigan’s mandates, guests will be limited in number, face coverings will be required, and no food or beverages will be permitted inside the building.

Memorials are suggested to the Humane Society of Monroe County. Online guests may visit www.merklefs.com.