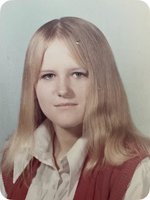 Veronica Johnson was Born April 9, 1957 in Monroe, Michigan. She was one of two siblings and the only daughter born from the union of Laurence and Zelma (Ellison) Johnson. In 1975 Veronica graduated from Grosse Ile High School.

Growing up, Veronica was quite the fashionista.  Throughout high school, she continued being a trend setter and undoubtedly was voted Best Dressed by her peers.

Veronica would be blessed with four children of her own.

Veronica was a very caring person; she never met a stranger and would do anything for anyone. She will be remembered for a lot of things, but most noteworthy was her kindness, generosity, compassion, and ability to make people feel special.

Veronica Rayba, age 63 passed away suddenly in her home on Friday July 24, 2020 at 7:21a.m. In addition to her passing, she is preceded by her father and one nephew: Graham Johnson.

Services were private and cremation has taken place. Services and inurnment will take place at a future date, in Tennessee. Merkle Funeral Service, North Monroe, 2442 North Monroe Street, (734) 384-5185 were entrusted with her services. Friends may leave words of comfort and inspiration or share a photo by visiting: www.merkelfuneralfs.com