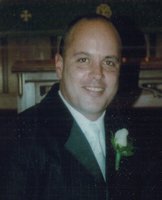 Marc David Herrera was born April 7, 1970 in Monroe Michigan. He was one of five children born from the union of Manuel and Sandra (Minney) Herrera. He would attend and graduate from Monroe High School in 1988.

After a long courtship, Marc married the love of his life: Kari (Paterson) on November 11, 2006 at St. Paul’s United Methodist Church in Monroe, Michigan. From this union, the couple would be blessed with one son: Caymen Manuel.

Growing up, it was common for Marc to watch or attend the Detroit Tiger’s baseball games. He would continue this love of the Tiger’s and always look forward to attending a baseball game in Detroit, but he would never miss an opportunity to listen to them on the radio or watch them on the television.

Marc believed in the simpler things in life and was very much a private person.

Marc would really like to show off his cooking skills, especially to his son Caymen. His specialty would be to grill up pork loin chops or steaks with corn on the cob for him.

Marc David Herrera, age 50 passed away at ProMedica Monroe on Tuesday July 21, 2020 at 6:50p.m. In addition to his passing, he was preceded by his wife: “Kari” (Karin Paterson) Herrera.

Services were private and cremation has taken place. Merkle Funeral Service North, 2442 North Monroe Street, (734) 384-5185 has been entrusted with his care.  Friends and family may leave words of inspiration and comfort or share a photo by visiting: www.merklefs.com