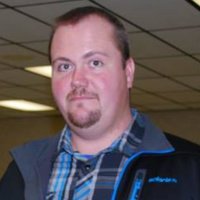 Deane Charles Rogers was born in Monroe, Michigan on February 18, 1984.   He was the only child born from the union of Edward Rogers and Deborah (Wiseman) Rogers.   He grew up a Jet attending Airport Community Schools, graduating with the Class of 2002. Following high school, he would attend Monroe County Community College to study automotive engineering.

Deane went on to work at several different auto parts stores, and for the last three years, worked as the Head of Commercial Accounts for O’Reilly Auto Parts in Flat Rock.

Deane was truly an old soul and wise beyond his years. He was very quick witted, with a great sense of humor. He was shy until he got to know you, but once he did, you were friends for life.

Deane has an insatiable appetite for anything old. He collected vintage Fiestaware and other ceramics. His latest passion was assembling an impressive collection of craftsman era furniture. He was very proud of his “finds” of vintage Stickley pieces. He loved Art Deco and craftsman architecture. He and his friend, David Struck, would drive around Detroit and look at the beautiful buildings and homes. His favorite architects were Albert Kahn and Frank Lloyd Wright.

He was a skilled craftsman himself. He was particularly fond of Brass Era outboards, his favorite being the Caille, made in Detroit.  His hobby became a real labor of love.   In fact, some of Deane’s engines found a home in the Mariner’s Museum on the East Coast.   He was also quite fortunate to have sold his Calle engines from the 1920’s to individuals to be placed on display as decorations in their homes.

Deane loved to be on the water and loved boating with his friend, Bill McIsaac.   They of course were proud of the rebuilt antique motors and would spend hours on the water using them.

Another passion of Deane’s was collecting and restoring antique farm tractors. He and his Grandpa shared many good times together working on and taking them to tractor shows. Like the boat motors, these were also restored to perfection. His favorite was Allis-Chalmers, but he had encyclopedic knowledge of all brands whether they were orange, green, red, blue or yellow. He could identify the year and model of almost every tractor he encountered.

Deane also loved classic cars. He restored a Ford Model T several years ago, and he was an authority on the Model T. He marveled at the engineering in the early automobiles. His dream was to someday own a Packard, to him it was the ultimate automobile.

Deane Charles Rogers, age 36, of Monroe, Michigan passed away unexpectedly at 9:46pm on Sunday, May 17, 2020 at his home.   In addition to his mother his passing was preceded by his maternal grandparents:  Charles and Marie Wiseman.

To cherish his memory, Deane leaves his loving father:  Edward (Candy) Rogers of Monroe, paternal grandparents:  Deane and Leona (Yoas) Rogers, numerous aunts and uncles; and his cat, Ernest, who is a polydactyl.

Due to current physical distancing restrictions, no public services are planned at this time.   Merkle Funeral Service, North Monroe; 2442 North Monroe Street, Monroe, Michigan 48162 (734) 384-5185 has been entrusted with his arrangements.   Online guests may leave words of inspiration and comfort or share a photo by visiting www.merklefs.com.