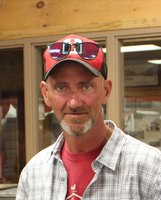 Jim was an extremely hard worker and for many years he was employed as a union pipefitter and welder.   He also enjoyed toiling on his parents’ farm, planting and harvesting crops for them.

Although Jim loved to work, in his spare time he liked to spend his time with friends and family but mostly with his two boys whom he loved very much.  He enjoyed playing a round or two of golf whenever he could.   He was a fan of Michigan football and also NASCAR.   His afternoon weekends would often be spent sitting in front of the television and relaxing.

Jim had a wonderful sense of humor.   He was quite the jokester and loved to make people laugh and tease them.  Jim could always be counted on to be there for anyone that needed help.

Douglas James “Jim” MacDonald II, age 45, of Monroe passed away at 3:45pm on Wednesday, April 22, 2020 at Michigan Medicine in Ann Arbor after a short battle with renal failure.   His passing was preceded by a sister:  Joanne MacDonald.

In lieu of flowers, memorials are suggested to the family to assist with funeral arrangements.   Online guests may leave words of inspiration and comfort, share a photo, or make a donation by visiting the CROWDFUNDING page at www.merklefs.com.