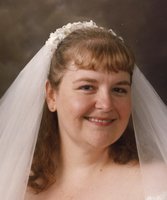 JoAnn Michele Jaciuk was born in Trenton, Michigan on February 20, 1968 to Florence Jaciuk.  JoAnn was a 1986 Graduate of Roosevelt High School in Wyandotte where she was very active in extracurricular activities such as, playing the saxophone in the band, singing in the choir, participating in plays, running track, javelin and shotput.  She went on to receive her Bachelor’s of Psychology at Wayne State University and her Master’s in Psychological Science in Counceling  at Springfield College in Massachusetts.

JoAnn found employment at Ava Maria School of Law in Ann Arbor as a Financial Aid Director for three years, Wayne State University as a Financial Aid Officer for ten years and recently as a Paraprofessional at Dundee Community Schools.

Taking a chance with on-line dating, JoAnn met her future husband, Alan Maseman, on match.com. They quickly fell in love and married on August 19, 2000 at St. John the Baptist in Toledo, Ohio.

JoAnn was known for her friendly, bubbly spirit.  JoAnn enjoyed country line dancing, golfing and archery. She has always been a Detroit sports fan, sport oriented and loved to attend her son’s athletic events. Having an appreciation for the outdoors, she looked forward to her travels up north taking in the scenery and visiting lighthouses.

In her quiet time, JoAnn could be found reading her favorite authors or writing in her daily journal.

Joann Michele Maseman, age 52, of Dundee passed away at 6:05am on Thursday, April 9, 2020 at Hospice of Lenawee.   Her passing was preceded by her in-laws:  Frederick N. and Rosaline Maseman.

To cherish her memory, JoAnn leaves her husband of nineteen years: Alan; her son: Joseph Maseman of Dundee; her mother:  Florence; her brothers-in-law:  Frederick (Zoya) Maseman of Mena Arkansas, and Neil (Chris) Maseman of Toledo; her sisters-in-law:  RoseAnn (H.L.) Slaughterbeck of Lambertville, Barbara (Jim) Parks of Norco, California and Helene (Frank) Smith of Sylvania Ohio; and several nieces and nephews.

Private services have been held and burial has taken place at Oakgrove Cemetery in Dundee.  Arrangements have been entrusted to Merkle Funeral Service, Dundee; 297 Tecumseh Street (734) 529-3156.

Memorials are suggested to the family to assist with funeral arrangements.

Online guests may leave words of comfort and inspiration, share a photo, or make a donation on the Crowdfunding page by visiting www.merklefs.com