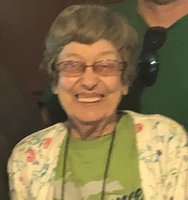 Cecilia Miracle was born in Pineville, Kentucky on March 5, 1940.   She was one of eight children.  Nickie was the daughter of the late Cecil Miracle and the late Ada (Mason) Miracle.

She married Gerald Bashaw.   Later, on August 4, 1962 she married Horace W. Gibson in Monroe.   Nickie would care for the needs of her husband and children as a homemaker.   She also would spend some time working in the hospitality industry at local bars and restaurants.

Nickie always stayed very busy.  She was a Campfire Leader for several years.   She was very crafty and loved completing needle point, cross-stitch, sewing, beading, and leather work.   Many of her creations were taken and sold at craft shows.   Nickie also built furniture, making a special baby bed for Debbie.

Later in life Nickie continued her service to others by assisting seniors.   She did errands and household chores including clearing gutters, painting, and cleaning.

Nickie loved family and enjoyed spending time with them.   She liked playing Bingo wherever she could and although she never actually won, it was just plain fun!   She spent time playing computer games, loved going out to eat, and taking casino bus trips.

She proudly went back to school and earned her diploma in 1987 from Monroe High School.

Cecilia “Nickie” Gibson, age 79, of Temperance passed away unexpectedly on Monday, February 17, 2020.   In addition to her parents her passing was preceded by her husband:  Horace in 1985; a daughter:  Deborah Reece in 2019; six siblings:  Betty Jane Langton, Geraldine, Mildred Dozier, Modeen Cross, Robert Louis Dozier, Cecil Miracle; and a long-term partner and friend:  Bonnie J. St. Aubin on May 30, 2010.

Due to Nickie’s love for animals, memorials are suggested to SNAP animal Rescue.   Online guest may visit www.merklefs.com.